When a beloved community member who has been legally blind since birth gets the chance to see, the FEC and amusement industry professionals within CenterEdge’s network help make the impossible possible.

Every once in a while, if you’re lucky, you get the chance to be part of something life-changing – something miraculous. We at CenterEdge had such an opportunity recently alongside one of our treasured team members. We got to be a part of helping someone see again. 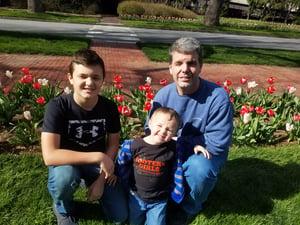 Trainer Andy Rye has been with CenterEdge for five years and, before that, with our sister company Palace Pointe for nearly 15 years. He works tirelessly with our clients and gives selflessly in every relationship. Countless stories have been told about his commitment to excellence, and his attention to detail.

“Andy saved me from a nervous breakdown, for sure,” recalled one client. “I was struggling to get our new facility open over a weekend and Andy gave me his cell phone number and said, ‘There’s nothing you can break that I can’t fix for you, so call me if you have any trouble.’ I literally wore his phone number on a wristband on my arm the entire weekend.”

What many people don’t know about Andy is that he’s been legally blind for most of his life.

A CenterEdge Favorite Gets the Chance to See

Andy was born with congenital cataracts and had five surgeries before he was even seven months old, but he never let it stop him from doing everything in life he’s ever wanted. For example, he played sports growing up and went to nationals four years in a row for track and field.

Then, on March 20 of this year, an almost too-good-to-be-true opportunity presented itself. Andy heard about a company called eSight, which manufactures glasses that can give certain legally blind patients 20/10 vision for the first time in their lives. Andy asked everyone at CenterEdge to carry him in our thoughts as he went to the eSight consultation, nervous to learn whether he would be a candidate.

When he found out the technology would absolutely work for him, Andy and his family were thrilled, but it wasn’t a done deal. The price tag for the glasses was $10,000. Andy was shocked but never lost faith, knowing that, somehow, he would find a way.

Almost immediately the CenterEdge team and Andy’s friends and family took to social media on his behalf. Donations poured in from within our company and from all over the wider industry. The response was overwhelming. So many people who heard his story generously donated. Together, we were able to raise the $10,000 Andy needed in less than a month and, at the end of April, Andy was fitted with his very own pair of eSight glasses.

“It was the first time I’d ever seen my wife, or my oldest son,” said Andy. “To be able to sit in a room and see their faces clearly. It was so emotional because I’d never been able to before.”

The glasses will take some time to get used to, but Andy already believes they have changed his life for the better. “Even the little things are big. I can do things with my kids I couldn’t really before, like go for walks, view the mountains in the distance, or even read any book I want to my four-year-old,” said Andy. “There really aren’t words to describe how grateful I am, and how I wish I could repay this blessing.”

We’re so happy for Andy, and proud to have played a part in helping someone who has done so much for so many. Thank you to all the CenterEdge team members, partners and friends who helped make this miracle happen for our colleague and very dear friend.

Learn a little bit more about Andy and the essential role he plays at CenterEdge here.