CenterEdge had the opportunity to attend the Maximize Profits through Operational Excellence workshop in Orlando last week in advance of Birthday University. One of the hottest topics discussed was game room operation, and Bernie Robinson, Founder and Partner of FUNstruction Results, shared key insights to help new and seasoned operators maximize their game room’s revenue potential.

We had a few minutes to sit down with Bernie to learn more, and here’s what he had to say.

Q1: What’s one of the biggest mistakes new owners make when planning a game room in their FEC?

The biggest mistake, hands down, is that they don’t plan it at all. The arcade is an afterthought. By the time they think about it, they may have run out of budget, or space, and that’s a huge miss. What people don’t realize is that it’s one of the most profitable components of your facility. In terms of space, factor in 65 square feet necessary per game at an average of $12k per game – some will be lower, and some much higher.

Q2: What types of games should facilities include in their game mix?

There are three types of games every facility needs: video, redemption, and cranes or merchandisers.

Video games are “pay and play”, but you don’t get any rewards. Typically, the run time of these games is a few minutes longer than redemption. The key when incorporating video is that they must add another dimension into the experience to make it worth it to guests, since they’re not earning rewards like points or tickets like they would in a redemption game. The Jurassic Park game is a good example of this because you’re pulled into another world – a world you can’t get at home. 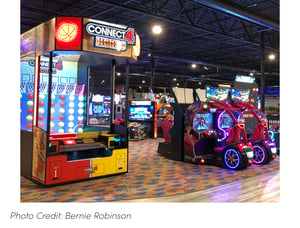 Redemption games, like I said, offer the guest rewards – points or tickets that they can use to buy merchandise in your Redemption store after they’re done playing. It’s about the reward; and in today’s economy, everything we do is something about rewards. You definitely can’t get these experiences at home, and they will really drive your business, so factor in somewhere between 60 and 80 percent of your games as redemption games. They have a shorter gameplay than video but are extremely popular.

For example, The Big Bass Wheel has been so popular because it’s a big, impressive game, usually with a high payout of 35-40% percent. Others are Power Roll and Connect Four Hoops, as well as coin pushers, all of which will be extremely popular and last you a long time. 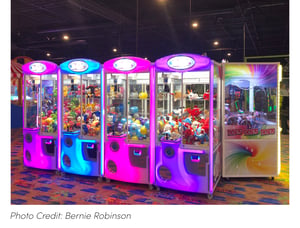 These games are the evolution of the crane games. In the past, they were stuffed with plush or candy, but now they are adding a totally new revenue stream with higher end items that people want. A game like Keymaster with the right stuff in it, like iPads, jewelry, designer handbags, branded merchandise, you name it – as long as it’s paying out properly – will pay for itself in a short time. It’s the chance at instant gratification that players want.  Some states regulate the prizes you can put in them, so check this before you purchase these machines. But games like that are a great marketing piece because when players win, they run all around the game room talking about winning and post about it.

CenterEdge tip: remember that you should be socializing winners on all your social platforms as well!

Don’t forget to have some “winner every time” games. For example, consider adding knobby ball cranes with your logo on each one. Make it a winner every time and charge a dollar – you’ll make 75 cents. Guests will be happy, and you’ll have branded merchandise in their hands. These games are popular and inexpensive, and you can pay for it in two weekends at a busy location.

On the other side, the Xtreme Crane might cost you $50k but could be your highest earning game by far.  Charge $3 per game and put a great big knobby ball or licensed plush in it. Set the payout at 25 percent and then you can just walk away! It’s a terrific producer for any facility. Other good ones are ticket cranes like Ticket Rings, and Taj Majal, which is up and coming, and it’s the second-highest producing game in several of our clients’ locations.

Q3: You mentioned the proper payout, can you elaborate on that?

First, understand that winners make players, so you need to let them win if you want them playing. Merchandise is why people are playing the games. You want your redemption marked up enough to cover the costs, but don’t make your money on the redemption. Your goal is to get them to add more play to get them closer to the prize. A good goal overall is a payout of 25-30 percent, and you’re in good shape. This means that your Big Bass Wheel may be paying out 34 percent but your Skee Ball might be paying out 15 percent. This is determined by the value of the game play.

Q4: What kinds of prizes should be offered in Redemption Stores or counters? 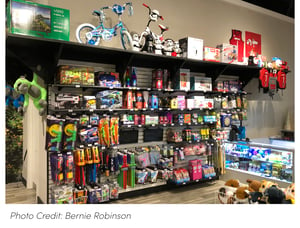 You want them to be happy and come back. Bottom line, if you want a lot of people playing, have good prizes. It’s a good idea is to purchase 20 percent of your prizes as local merchandise, like local team jerseys, hats, bags, etc. Make sure you have prizes your customers want to win. You also can’t go wrong with high-end electronics, of course. We had a client with a guest who had over 1,000,000 tickets, but there was nothing he wanted in the store. The client found out the guy was taking flying lessons, so he paid for a lesson for him to use his tickets. He made a life-long player that day. So, my best advice is listen to your demographic and get creative. And don’t just put merchandise in Redemption – stage prizes throughout the facility to entice guests to try and win them.

Q5: A game room is a pretty big investment, so how do you keep it fresh and enticing?

At the end of the day, Bernie says, “Treat your game room like an attraction, and you won’t be disappointed.”

Have questions for Bernie? Reach out to him at bernie@funstructionresults.com or join us for the next Maximizing Profits Through Operational Excellence seminar in Chicago.