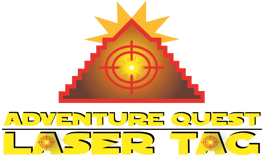 Today’s Client Spotlight is Adventure Quest Laser Tag in New Orleans, Louisiana.  The facility boasts a 6,000 square foot, 38 vest laser tag arena, cosmic mini-golf, bumper cars and an outdoor Adventure Maze. And while they have a lot of attractions that make them big players in their market, they believe what sets them apart is that they genuinely care about their guests and attempt to always make them leave excited and with a smile.

It’s that kind of focus on their quest for an exciting experience that first drew their general manager, Tabatha Porter, to work for the facility.  She remembers being thrilled to be a party host and now shares her passion for working with kids and ensuring there are never any dull moments at Adventure Quest!

According to Tabatha, their hiring practices ensure that they hire people who are equally committed to guest service by holding group interview auditions. 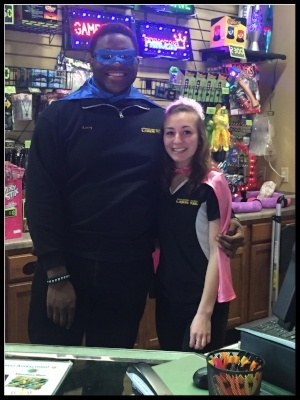 Each audition session runs for 90 minutes to two hours with 10-30 candidates in each session. Candidates are asked to perform a series of tasks, including “Act, Sing, Say and Do” where they show their personality by performing a task they’ve pulled out of a hat.  They also individually introduce themselves to the group, and what’s really inspiring is that the group gets to ask them questions in return.  That’s brilliant for operators because this kind of interaction shows how outgoing candidates are, and also provides glimpses of what kind of team they would create together. The sessions also have a role play component, where groups are split up into separate party rooms to create a skit about some aspect of the job. While groups are preparing, though, center managers are observing them through a window, watching for who assumes leadership, who’s most excited, and who would rather be watching Netflix – great information to have before you hire.

When asked what makes her job easier in the CenterEdge software, Tabatha explained, “I love the software.  But especially the synergy between the point of sale and Advantage Groups.  Before, we used two different systems and had to reserve laser tag tickets manually. Using Advantage Groups makes party booking much easier. Oh and we really appreciate the time you all take in training!  We learned so much when we came on site and we love the time you guys took.”

It’s working with clients who love learning and making big things happen for their businesses that make our jobs so great! Thanks, Tabatha, and the team at Adventure Quest Laser Tag for being our Client Spotlight. Check them out at www.lasertagnola.com.